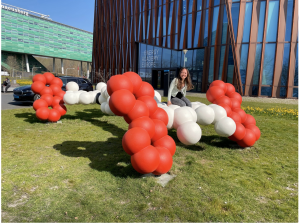 The tl;dr: I did some crazy science in The Netherlands for ~a year on a Fulbright Research Grant, fell even more in love with this country with its new and old friends, and became more interconnected than ever to an international community

My Fulbright year has flown by just like that and it seems a bit like a fever dream in retrospect already. It’s nearly impossible to sum up this year in one piece, but here’s my shot at a year-at-a-glance.

The setting: Groningen, the city I called the North Pole of The Netherlands. There’s actually a Dutch saying to introduce Groningen: “Er gaat niets boven Groningen.” It translates roughly to “There is nothing above Groningen,” referring both to its geographical position as one of the north-most large Dutch cities and the experience of life within. The city is bustling and so charming, with a canal running around the city center and people milling/biking around at all hours. Groningen is the youngest city on average in The Netherlands, with >25% of the population composed of students. So it has a reputation for being a hotspot for student life, a reality I certainly enjoyed.

Mijn zomer in Amerika: Jay over de Study of the US Institutes
7 oktober 2022