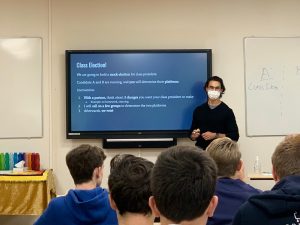 How would you explain America’s upcoming election in fifty minutes or less? Could you do it across a language barrier, across a cultural barrier, in a country accustomed to over a dozen political parties, instead of just two? Doing so would require a kind of Rosetta Stone: something to translate not just the words electoral college and absentee ballot, but also their implications, what they might mean for Americans and Europeans alike.

My fellow Fulbrighters Julia Jung (Utrecht University), Catherine Knox (Vrije Universiteit Amsterdam) and I tried our hands at translation last month. Set to teach a short class on the U.S. election system at Dorenweerd College in Gelderland, we tried to create a lesson plan that would encourage a more nuanced understanding of the imminent vote. We included definitions for the relevant vocabulary – nationalism, political platform, etc. – and activities to help illustrate the “winner takes all” logic of electoral points. But we were writing for an invisible audience, with no way of knowing how the lesson would be received, or if it would be understood.

Arriving at the school, we received encouragement. The space itself seemed reassuring – set back on a tree-studded hill, the high school was open, bright, filled with the same type of nervous energy we remember from our own teenage years. Inside, the teachers who had answered our late-night emails and deciphered COVID regulations to bring us in all assured us that the students were excited and receptive. The students themselves – somehow already taller than us at just fifteen – took their seats respectfully, listened closely, participated tentatively. As the lesson marched along, we loosened, seeing that the words were being absorbed. But the concepts? Did they translate? We couldn’t know until the final minutes of the class, the time when we asked “Any questions?” and waited, nervously, for signs of comprehension.

In each class, the silence after the question seemed to stretch impossibly long. Twenty or so students, suddenly hushed, as if a cleared throat or muffled cough would be met with an invitation to speak. We waited with tightened stomachs, wondering whether we spoke too quickly, too slowly, too softly. But a hand eventually found itself raised, and a question issued forth with thoughtfulness and engagement beyond what we had expected. With the question, the classroom shifted from monologue to dialogue, and we remembered the reason for our time here, both in Gelderland, and in the Netherlands in general: to foster dialogue in every interaction, and to connect despite barriers.

Speaking with the students at the end of the lesson, we felt this connection, and are grateful to Dorenweerd College for letting us into their lives, and to the Netherlands’ Fulbright commission for allowing us to forge such connections in a time of such uncertainty.